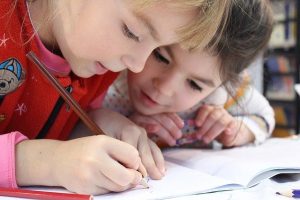 As the world becomes increasingly connected, we are exposed to new people from other places that may seem confusing at first, especially to children. By introducing kids to a second language in school, we can give them a great start to appreciating others not born in this country by removing communication barriers and instilling respect for other cultures. These are just some of the benefits of providing children a bilingual education.

Expansive Communication Style
Early childhood education includes a focus on training children to be effective communicators in their native language. But teaching them there is more than one language in the world is eye-opening and usually exciting for kids who are enrolled in childcare programs. Learning a second language in daycare expands the ways in which they learn to communicate and to overcome potential barriers to conversations with non-native English speakers in their classes. Additional learning pathways in beginning a second language can encourage continued exploration of new and challenging subjects.

Cultural Appreciation
As children enrolled in day care begin to understand that the world is much larger than their immediate environment, they can become more aware of kids from other backgrounds. Children who learn to communicate even minimally with students from other cultures can quickly begin to better understand the other child’s culture and values. Instead of viewing someone who looks or speaks differently as subordinate, they can better appreciate that person as an equal.

Interactions with Other People
Many child care programs today have kids enrolled from other cultures. Their parents may be university students or company employees from an overseas nation where English is not the first language. Encountering bilingual children in a childcare environment often inspires a desire in English-speaking kids to learn another language to be like their new friends in day care. Young children who develop this awareness of another language and begin to learn it themselves may have their attention broadened to others in public whose first language is not English, fostering sensitivity to and interest in other people.

Enhanced Learning Capability
Bilingual children enrolled in early childhood education programs often come from families where English is not the first language. Native English-speaking children can develop empathy for kids who are trying to learn English and try to help them master the new language. In turn, these young students are often eager to learn a second language to connect more fully with bilingual classmates and their families. They may learn to see and understand daycare experiences from a different perspective as well as their own.

Diversity Exposure
With a growing global interest in diversity and inclusion at every level of society, it can be highly beneficial for young children in child care to start learning a second language. In addition to helping them better understand the non-native English speakers around them, they might also become better prepared for future encounters with elementary school classmates, and eventually, coworkers and colleagues in their employment. Starting at a young age will give them a strong start in avoiding prejudice and viewing everyone equitably, including those who look or speaking differently than they do. This can be the start to a life-long, successful approach to intercultural relations.

Future Education and Career Opportunities
Bilingual education can play a valuable role in preparing preschool-age children for upper level education and eventual careers. Young children typically love learning new things that are interesting and fun. Studying a second language can be very exciting and help to orient them toward ongoing second language acquisition and cultural diversity appreciation in their jobs and beyond.

Learning a second language provides insight to the way that other cultures view things or evaluate situations that may differ from those in the U.S. Kids who learn a second language in day care may be interested enough to continue studying the language as they grow. This can lead to positive outcomes that are not just personally meaningful but also professionally fulfilling.

This entry was posted in Uncategorized. Bookmark the permalink.